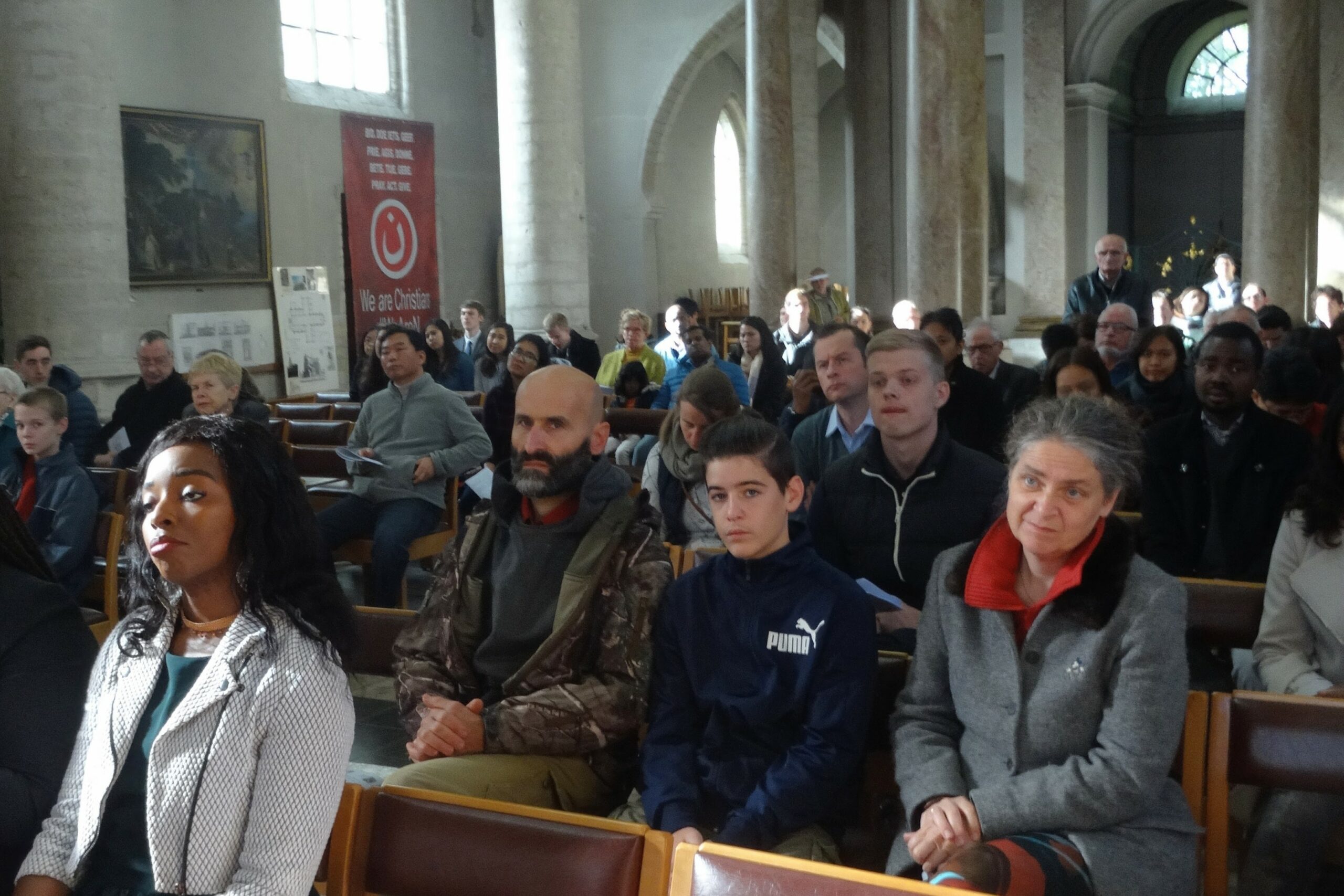 9 July 2017, a seemingly innocuous summer Sunday morning, is going to be a turning point in our lives. Could I search on my pc where we can attend an early Mass? asks my husband, Christian, still unsuspecting. After a bit of Googling, I happened upon an English-language Mass at 9:30 in the center of Leuven. Strange, never heard of it, and, oh no! our English dates from years ago, but “for this one time, we will survive”, we thought then. It was not just this one time. Providence had plans for us. It would have been highly inappropriate to thwart those plans.

The first thing I remember from that Sunday are the ushers: four young, friendly Asian women who welcomed us. Never experienced such a welcome before. The second memory is the sparkling teeth and dazzling eyes of Fr. Bosco, smiling broadly at us from the dark back of the church (he thought: newcomers! I thought: such a friendly priest!). The third memory is Fr. Aaron’s announcement that he would be leaving this parish in September. Judging by the number of emotional reactions after Mass, I suspected that he had left a deep impression on many. Soon I would understand why. The fourth memory is of the angelic voice of Marijke, singling ‘Christ, be our light’. I sensed that the music is very well cared for and prayerful: applaudable! The fifth, simply overwhelming memory, is the reverence for the sacred, the Word, the consecration, the distribution of Holy Communion. This is truly a praying community that gathers around Christ, living in its midst. People from East and West, North and South, with their own gestures, their own expressions, their own (clothing) style, old but especially young, all with hope in the Lord, a song of praise on their lips, a supplication in their hearts, struggles of conscience, the joy of being forgiven.

With our entrance into this community ‘purely by chance’ that Sunday, the Lord Himself was overjoyed to answer our fervent prayer for help. Indeed, from that day on, Sunday became the day par excellence for us as parents of three growing boys (and two in heaven) to recharge our batteries, face the week with more confidence, seek wisdom and insight, grow in faith by seeing others practicing their faith. During Mass and, yes, also during the unsurpassed hospitality, in literally so many languages, flavors, smells and colors!

Meanwhile, more than four years have passed, there is much laughter at home, two of our children come (very) regularly to church, we cherish (almost) two godchildren, we enjoy international friendships and formative conversations, we witness couples in love, young couples, the birth of new life, job switches, obtaining doctorates, quiet struggles and quiet courage, and so much more. Beautiful!

The C-crisis spares no one, and so the parish, too, must fight its way through. We feel very strongly that this global crisis is actually more spiritual than medical. Trust in science (versus in God) is often unbridled and unconditional. This seems very dangerous to us, because science is practiced by people, and thus by definition is never free from error or even corruption. The bishops’ decision to cancel public Masses for quite a time astounded us. That’s why we enthusiastically pushed for Sunday Adoration, so that we could keep the focus on Christ. Thanks to all the volunteers!

As Christians we are anchored in hope. God leads His people through all difficulties; He has always done so. We may trust that He will also do so in this crisis. At least, if we entrust ourselves to Him. We learn this at Sint Kwinten! Truly, celebrating Jesus’ resurrection together is one of the most precious pearls He entrusted to mankind! Maranatha, come, Lord Jesus, come!