Home » Grace upon grace: We are tremendously grateful 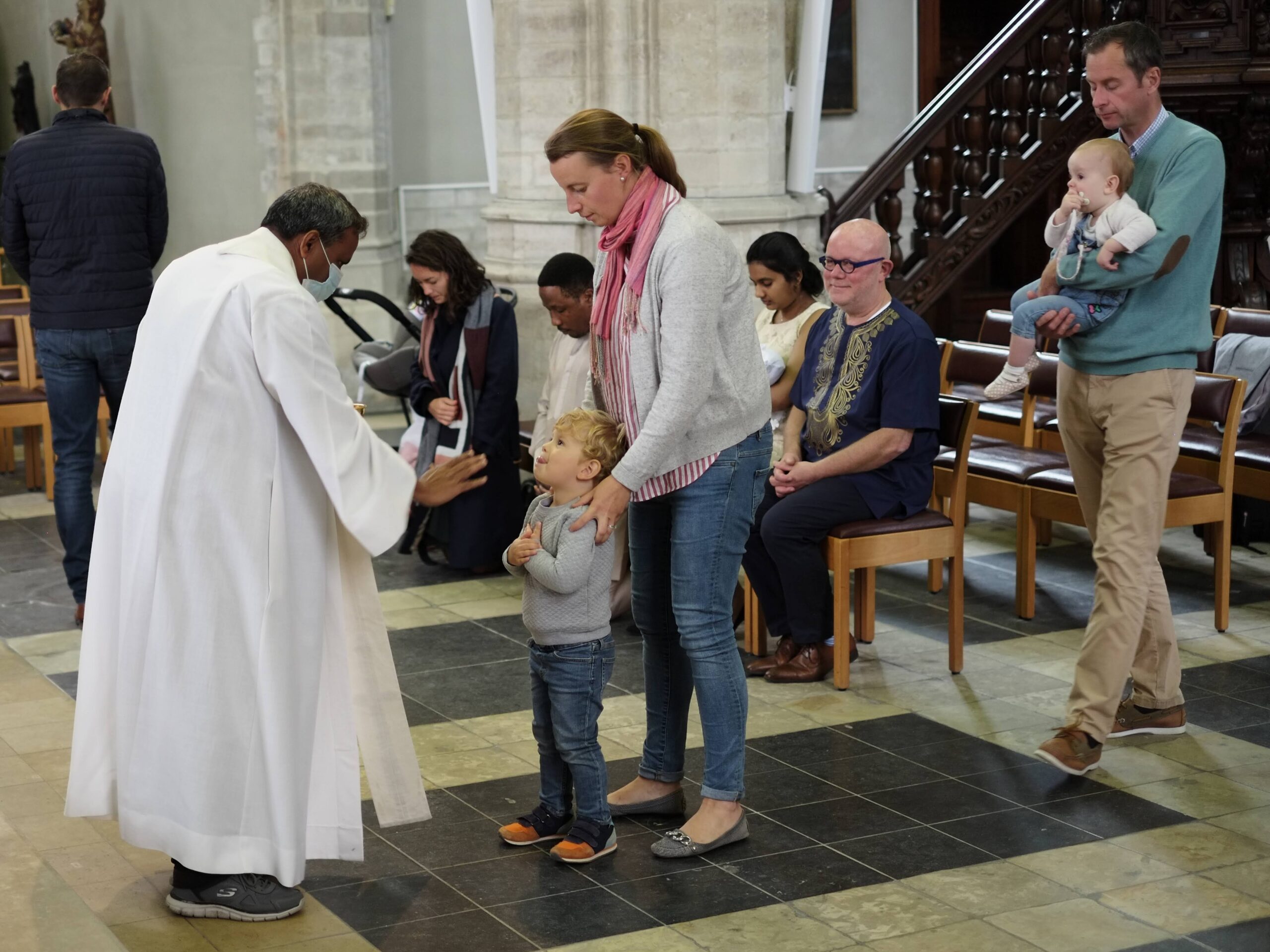 Anouk – I first came in touch with what we now know as Sint Kwinten’s when an American friend who lived in my dorm invited me to a mass in the American College. “You’d love it,” she said, “they’re very nice people and the liturgy is top-notch.” I think that pretty much sums up how I experienced my first few times at the American College: reverend liturgy and joyful people to hang out with afterwards. I kept going back and found I had become a part of a lovely community of people living away from their home countries, gathering around the Eucharist, spreading Christ’s message, and forging friendships. As a Belgian, and recent revert to the faith, I hadn’t seen anything like it, but I realized that this would be my little spot in the universal church

The message that the seminary at the American College would close came as quite a shock to both seminarians and the Sunday community. People were worried they would lose this little haven of fellowship and liturgy-in-English. We were incredibly grateful that the then quite recently ordained Fr. Troy volunteered to guide our little boat through the somewhat stormy transition to Sint Kwinten.

I will always remember those first Masses at our new ‘base’ in the beautiful church of Sint Kwinten: the same faces, the same liturgy, the same sacraments, the same joy, and the same fellowship. I remember us wondering over a cup of coffee whether we’d ever grow in numbers to fill the church. Little did we know that over the years many people – Belgians and internationals alike – would keep finding the way to our community. The longer we worshipped in Sint Kwinten, the more I came to realize that it is the Eucharist, the joy and the people that make a community; not the chapel, church, or refectory where you have hospitality.

Looking back, the American College/Sint Kwinten’s has been such an integral part of both my faith journey and my life. Many of the friendships that have made my life richer and many of life’s memorable moments, such as getting married, baptizing our children, celebrating Christmas and Easter… happened in or because of Sint Kwinten’s.

Over the years my involvement in helping the community move forward has taken different forms: being part of the community team when we first moved to Sint Kwinten’s church, trying to figure out how we could co-exist with and support the Dutch-speaking community, organizing the women’s group and now coordinating the lectors. Being able to play a small part in maintaining the essence of our community helps me be active member of the universal Church. I – and now we as a family – are thanked time and again for our time and service, but really, it is we who must thank the community and all those people who are involved in it. In a community like Sint Kwinten’s, it is not about one person, one leader, it is about many people pulling together, for the glory of God.

Mark – The first time I attended Mass in Sint Kwinten’s must have been in the spring of 2015. I was then living in England and regularly travelling to Leuven to meet my then girlfriend (and now wife) Anouk. I was impressed from the start. As a Catholic in England, you don’t get to go to Mass in churches like Sint Kwinten’s. I was struck by the beauty of the architecture, artworks, side altars and stained-glass windows. As I attended more regularly, I was also struck by the organisation and reverence of the Masses, always accompanied by wonderful music. At the beginning I was no more than a visitor but was immediately made to feel welcome by the members of the International Community – a dynamic mix of nationalities and backgrounds committed to living their faith openly and vibrantly. It was a great source of joy that Anouk and I were able to attend Mass together as we got to know each other. That we were able to do so in a community such as this enhanced this in so many ways.

Since first crossing the threshold of Sint Kwinten’s some seven years ago my life has changed profoundly, and I feel privileged to say that the church and community have played a key role in many of the highlights as well as the intervening months and years. Our wedding Mass in the August of 2017 was such a wonderful occasion – family and friends joined us in Sint Kwinten’s for a beautiful Mass which brings a smile to my face (and often a tear to my eye) when I think back to it. Since then, our two children George and Eleanor have both been baptised in the church. “That’s our church” exclaims our son when we drive along Naamsestraat. I thank God that we can come to Mass as a family in such a community.

Put quite simply, I cannot quite imagine how life would be for me here in Belgium without the International Community of Sint Kwinten. On a purely social level, almost all of the friends I have made since moving here have come from within the community. On a spiritual level the community has played no small part in helping me live my faith in a more active and deeper way. I remain as inspired as ever by the church itself but even more so by the other members of the community. It is hugely reaffirming to be surrounded by such dynamic and faith-filled individuals and families.

For us, Sint Kwinten’s is what every church community should be – welcoming, inclusive, dynamic, faith-centred, inspiring. It is a source of sadness to me that not all Catholics have access to such a community. We pray that all parishes and communities, especially those in most need, will be filled with the love of God and others, the faith and the zeal which characterises the International Community of Sint Kwinten. We are tremendously grateful to all those who work so hard to lead the community and look forward to continuing to be a part of the story of Sint Kwinten’s together with our children for many years to come.