Home » Blog » Home away from home: a reflection by Fr. Thomas 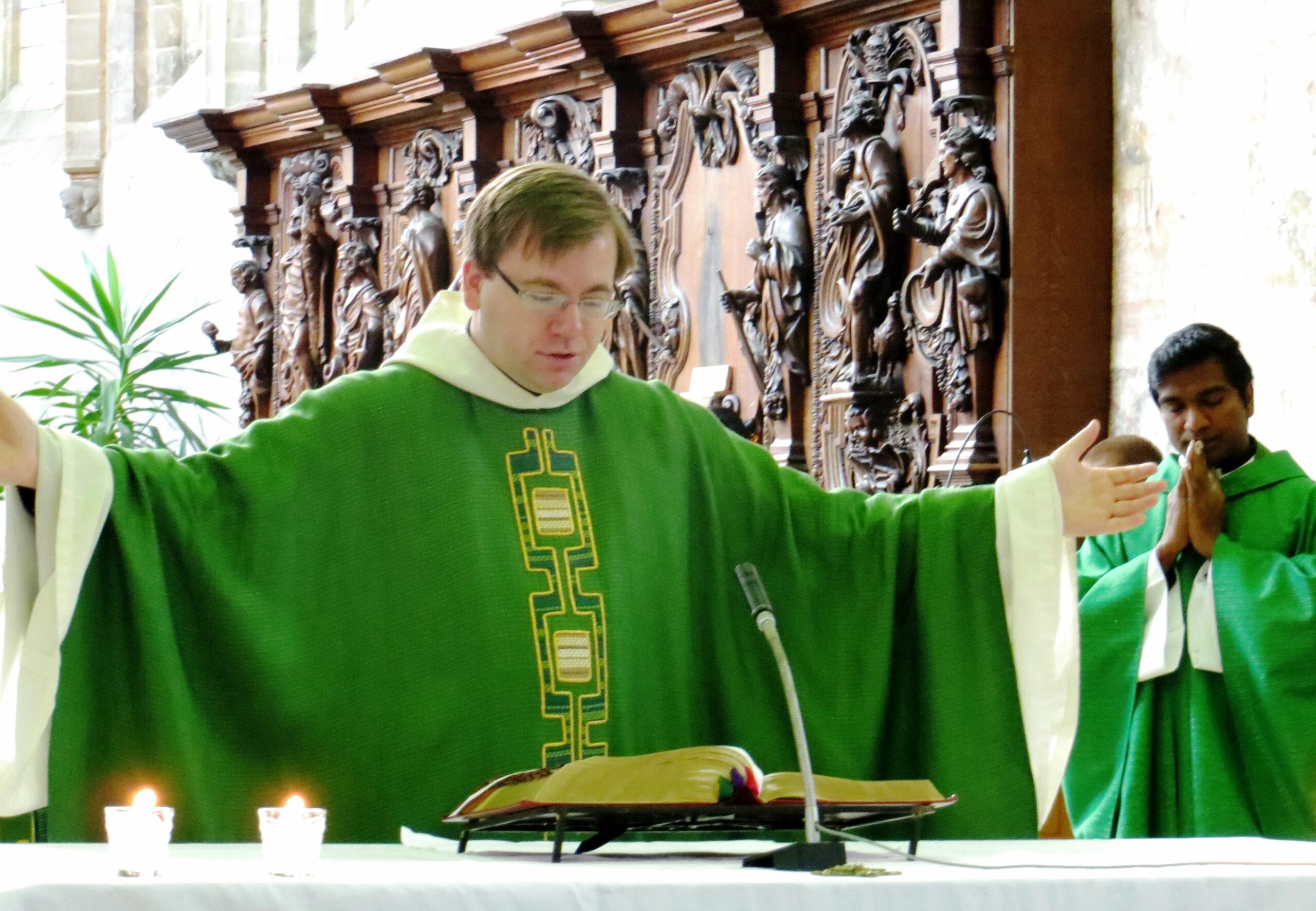 When I first came to Leuven, as a new seminarian in 2002, the rector assigned my class to offer hospitality to our Sunday Mass community at the American College. Older seminarians went out to minister at English-speaking parishes in Brussels and Germany, but us younger men ministered at home. We would serve as lectors and acolytes at Mass, and then serve as hosts and waiters at the reception to follow. The Sunday community would gather in the dining room to enjoy coffee and tea, biscuits and pastries. Most of all, however, we enjoyed each other’s company. It was not enough for us to be together in liturgy, we also spent an hour or two getting to know each other each Sunday. There were students who came and went year after year, and a stable group of “regulars” who lived in the area, or travelled far out of their way to be part of this community. My two years as a seminarian in Leuven taught me how a Christian community is formed around sacrament and fellowship.

A few years later, in 2010, I returned to Leuven to study philosophy more deeply and write a dissertation. The Sunday community remained, I recognized some familiar faces, the “regulars” who had kept coming to this chapel on Sunday mornings. And I met dozens of new people, the chapel and dining rooms were as full as ever.

Then on Friday 19 November 2010 the rector of the American College announced the decision by the USCCB that the seminary would be closed at the end of that academic year. The following Sunday he made the same announcement to the larger community. All the seminarians and formators would be re-assigned to other places. The only College residents who would remain in Leuven would be the graduate student priests and religious sister, though we would have to find new places to live.

Already on that Sunday, a number of community members approached Fr. Cyril Crawford and me about where we could all go to Mass and remain a community. Over the remaining Sundays before the college closed in the summer, the hope of continuing our community gave rise to a number of ideas.

Fr. Cyril took the initiative and received permission to celebrate Sunday Mass at the Leo XIII chapel, the site of another seminary that had been closed decades earlier. Our community met for first time in this new location on Sunday 18 September 2011. We were a small group at this point, and volunteers arranged everything, from reading and serving to singing and hospitality.

By October we had already received permission to use the American College chapel, on a temporary basis. We returned to the American College on 5 November. Originally the University would only allow us to use the chapel, but we convinced them to to open the dining room for us as well. Soon enough we would have to leave this chapel again, since the whole building would undergo renovations in the coming years.

We began looking for a new, though we thought temporary, home for our community. Eventually we were welcomed at Sint-Kwintenskerk, and the parochieploeg helped us get organized in the new space. What I remember most from this time of transition was how quickly we began to feel at home. The nave at Sint-Kwinten could seat many more people, and so here was an opportunity to grow. We received permission to use the parish hall after our Sunday Mass for hospitality. This seemed like an odd request to our local hosts, but soon they visited our community coffee and saw the value of this time together after Mass.

We realized that by staying at Sint-Kwinten we could become part of a full parish, and thus offer the sacraments of baptism and marriage, even religious education for children, and RCIA for those who wished to become Catholic. Sint-Kwinten was clearly where God had called us to be, and God blessed the work and effort that we, all of us volunteers, put into this community.

Over the next couple years I helped in whatever ways I could. When we started receiving priests who had not experienced the American College liturgies, I shared with them the liturgical values and ideals that had attracted people to our community in the first place. My role was to help ensure continuity of worship despite the many changes our community experienced in such a short time. My hope is that our witness to excellent liturgy and warm hospitality may help bring about a renewal in the Church in Leuven and beyond.

As a Benedictine monk living alone, far from my home community, the English-Speaking Community became my home away from home. The community gave me the opportunity to celebrate the sacraments, to preach, to baptize, and again to enjoy coffee and biscuits with many friends. I was never lonely because I was part of this joyful and welcoming community. I was never without work, there was always some new challenge that brought me personal growth.