Home » Blog » Why we baptised a baby in these circumstances 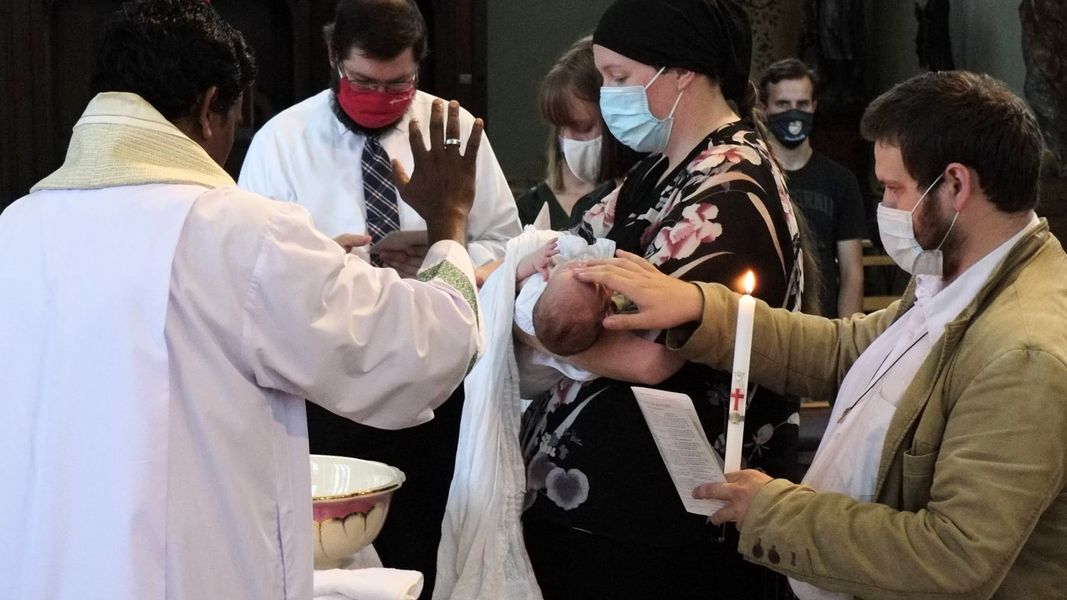 Though every Baptism is special, we didn’t expect the Baptism of our fourth child to be particularly unusual.

Last year, while we were travelling across the UK for the Baptism and Confirmation of Gregory’s godson Sayyid Alfred al Musawi, we stayed the night at Douai Abbey, where we married eight years ago, and received a baptismal candle from the monks as a gift. A gift which was quite providential, since we discovered the next month that we were expecting a baby.
In January, when we found out that we were expecting our first girl, the excitement that accompanies unpreparedness rapidly grew: we had nothing, and had never needed anything, particular to girls. Rapidly friends and family gave us whole boxes of well-stored clothes and bags of girls shoes, which were all in remarkably good condition, at least from our boy-ish experience with the life-cycle of shoes and clothes. Soon we were well equipped to handle the sartorial taste of any respectable young lady or spotted dinosaur.

It was in January that, after hearing some worrying news from China, Gregory started organising a small stock of supplies, much to the amusement of friends and coworkers.
The next problem was finding a name. We were sure that our daughter’s name would include Mary, whose role in Jess’s conversion is difficult to overstate, and Lucy, who kindly interceded regarding an eye condition that both Robin and Bartholomew had as babies. Which form and order to put the names in and whether to add another was a puzzle that we grappled with practically until the birth of our daughter.

When the lockdown happened in March we were expecting Jess to be able to stay out of harm’s way due to her pregnancy, but she was not recognised as a vulnerable person. The circumstances tested our trust in the secular institutions that claim to be responsible for the common good. Homeschooling our children was a blessing, and we realised that work and school had been starting to get in the way of our living together as a family. The obligatory fast from the Eucharist and Mass was exceptionally difficult for us.

Another blessing was our decision to have a home water birth, which meant that many of the intrusions and regulations that have come to dominate the atmosphere of hospitals couldn’t get in the way of the hard work Jess had to do. She felt the presence of the saints and of God more strongly than during her previous labours because of the long and prayerful preparations that she had made. It was also her shortest labour by far.

We were just getting used to going to Mass in person again at the time of the birth, and it had been a long time since we had seen a Baptism. We decided to have the Baptism of Anastasia Lucia Maria as soon as possible after her birth, both as a precaution and as a sign of hope and resurrection, for her, our family, and the whole community. We felt clueless as the Baptism approached because the regulations kept changing.

Shortly before the Baptism we found out that Fr. Rob Faesen SJ, who had baptised our three boys, would not be able to attend due to the circumstances. Fr. David Tulimelli SDB filled the breach and gave Anastasia the Sacrament of Baptism. We had many fewer guests than usual for us and a very intimate circle for the “reception” (a five-adult + children picnic).

We are very happy our family did this very necessary and joyful thing, despite the restrictions and regulations that prevented a more traditional celebration of this Sacrament.
God Bless You Reader,
The Arblaster Family