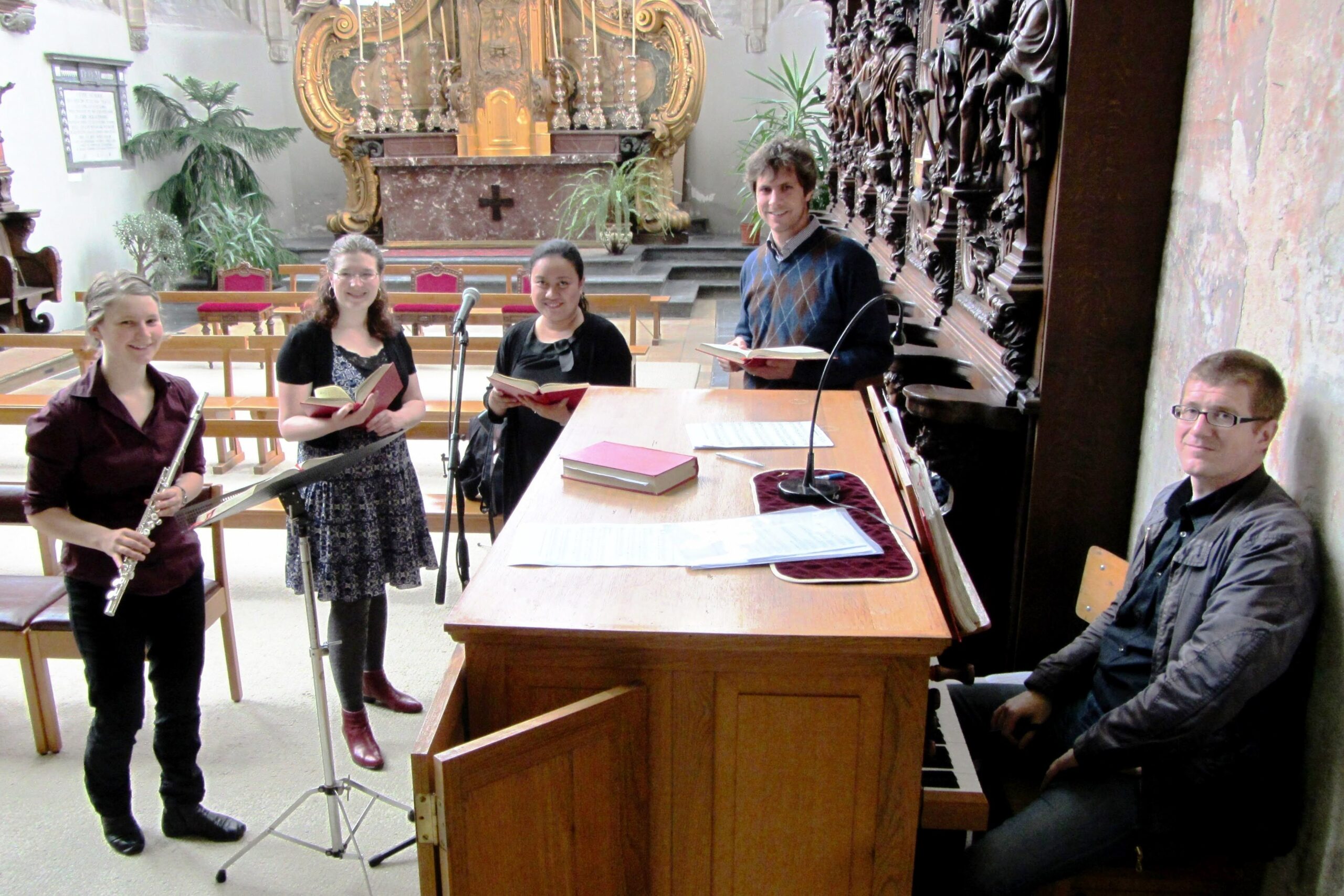 Looking back at this 10th anniversary of St. Kwinten’s International Community, I feel instantly that the world has changed. There has been a transformation of the Community from a ship-wrecked handful of Christians, trying to preserve their liturgy after the closing of the American College, to an established community with its own habits, its own activities, maybe even its own identity? Apparently, there was enough marrow in those days of fragility and brokenness to make a stronger bone.

As a “church pilar” from the first hour, I lived many adventures behind the organ, from the American College over to the Leo XIII Seminary, back to the American College, then to St. Kwinten. “Improvising” was the word in those days, since Father Cyril Crawford was in need of music to glue the liturgy together. And as such, I was a privileged witness of the ardent Christian faith, not in the least through the Sacraments but as well through the great, even momentous homilies that were spoken out over the miraculous gatherings of the full church.

This graceful happening of the Holy Spirit was, as far as I can see, the most lively storyline at the KU Leuven of those days, where many hidden storylines found their converging point. Young couples, just married, seminarians wrestling with their vocation, icon painting, musicians, faith talks and walks and a brilliant schola to keep the singing standard up as high as possible… “Raise the glad strain… alleluia!” The church was an alternative space at the university to step up and get involved in a spiritual journey. Most of all, the keeping-up of the flame of faith in a social context that is not very receptive towards it, has always had an Olympic flavor, something to be protected, to be carried on and not to have it vanish under any circumstance.

The music has always been a red thread throughout these many-layered stories and powerful chronologies. Gifted organists and cantors from Germany to Brazil, from Italy to Hungary and all over the world, contributed to the liturgy for the duration of their stay in Leuven. Many beautiful songs and traditional hymns not only marked the church’s atmosphere, but, I believe, were fitting as well in the bigger picture of a struggling Europe, remembering the first World War. Singing, together with Father Thomas Gricoski, the plainchant Requiem at “All Saints” was a profound experience to me that flourished afterwards in other musical creations.

The growing pains, struggle with faith, suffering and losses were certainly a part of our cross to share with the Lord. Therefore, I always lived it out (and perceived it as well) as a conversion story, as St. Kwinten Church itself tells a transition story from dark to light, with mystical experiences, pilgrimages and battles in humility.

Some memory images of the very first years would include the group on their first pilgrimage to Scherpenheuvel, in the fields between the poppies and the blossoms; the venturous St. Martin walks in December through the Beguinage with candles, hot chocolate and singing children; a colorful Newman Society, always grasping for essence and true meaning; a great barbecue under the magnolia of Leo XIII, as well the praying of the Way of the Cross in the American College Chapel with the icons of Father Paul Czerwonka; drinking a whisky and having a good faith talk with Troy Schneider, who kept the spirit high and was a great friend in Christ to all who were in need of company and support. Not to forget the ever-streaming little fountain at the foot of the altar in St. Kwinten. And of course, grateful remembrance our late Father Cyril Crawford, satisfied with a cigar and a pint of Guinness in the Irish pub, gathering his flock around him and involved in a theological discussion with some younger fellows.

After the strong rapids of the first years, the river has reached calmer waters now. Also this is to be considered as a grace, just as everything we have gone through was grace, overseen by the Lord. May Mother Mary oversee and protect St. Kwinten’s International Community along their everlasting way to peace and holiness.
Jo Coenen